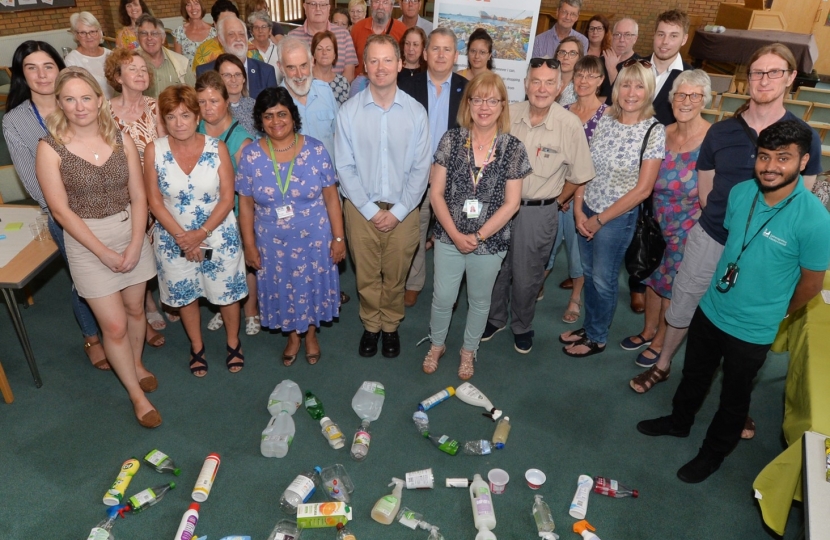 Neil O’Brien, MP for Harborough, attended and introduced the ‘Reduce your plastic event’ on Friday 26th July in Market Harborough, to spread awareness of the damage caused by single-use plastics.

The event was organised in partnership with VASL, Leicestershire County Council, Eco-Church and Harborough District Council.

The event took on an extra level of significance with the fight against single-use plastics and climate change being recognised in Harborough Council’s announcement of a Climate Change Emergency in June 2019.

The event included a number of speakers with Neil opening the proceedings with a speech focused on both local and national efforts in the reduction of plastic usage. Within his speech Neil stated that efforts to reduce the use of plastic nationally had resulted in over 8 billion fewer plastic bags being used since the 5p bag charge had been introduced in 2015. Speeches were also given by Rohini Corfield of VASL, Brian Davis of eco-church and Jayne Edwards from Leicestershire County Council.

In addition to these speeches, the Harborough Plastics Pledge was also advertised- a pioneering campaign which urges Harborough residents and organisations to make a commitment to reduce their reliance on single-use plastics with the emphasis being on small actions making a big difference.

Neil said, “Harborough can become one of the leading communities in the fight against unnecessary single-use plastics. Events such as this allows us to truly understand the negative effects that single-use plastics can have upon our planet and in particular our oceans. I am proud that we are beginning to raise the understanding and the fight against such plastics within the constituency.”

Rohini Corfield of VASL said, “For me the most important issue is about people feeling that we can make a difference in regard to recycling. Harborough can be a community that lives in a sustainable way with recycling being key to the community.”

There are lots of events taking place across Harborough, Oadby, Wigston & South Wigston as part of the Platinum Jubilee celebrations.