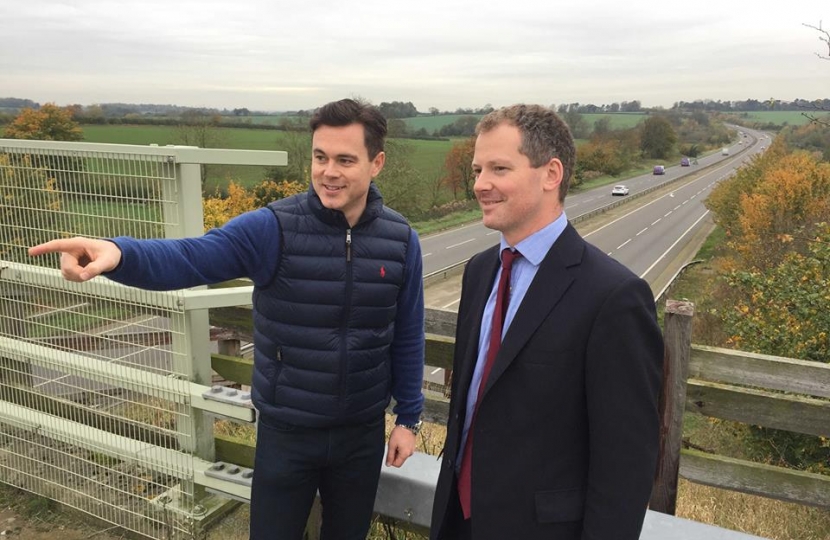 Neil O’Brien, MP for Harborough, Oadby and Wigston has been working with Leicestershire County Council to resolve A6 issues such as traffic and poor air quality.

Neil has been talking to Leicestershire County Council who are preparing to bid to get the A6 south of Leicester recognised by government as a “major” trunk road. This is the first step towards securing funds for substantial upgrades to the road.

Cllr Blake Pain is the transport lead for the county - he's pictured with Neil above taking a look at the A6 just north of Kibworth. He and other local councilors will be pushing this forwards in the coming months.

The government will consult shortly on the creation of a new “Major Routes Network” – a new system of trunk roads which will then become eligible for different types of central government funding, including the new Bypass Fund.

The A6 was previously a trunk road, funded by central government, but in 2004 it was “de-trunked”, meaning it was no longer eligible for central government funding. As many local residents know - previous plans for a Kibworth bypass were dropped, along with many other road schemes.

Neil and county officials have met with a number of government ministers and officials to promote the idea. He met with Transport Secretary Chris Grayling and roads minister Jesse Norman. A government consultation on which roads should be eligible to be included is expected to be launched before the end of the year.

Neil O’Brien said: “As I drive around the constituency I often get caught up in traffic jams on the A6 - particularly around Kibworth where the road slows down and is a single carriageway. Not only is the road slow, but the solid traffic also means poor air quality.

I know many other people in the area are concerned about this and residents have been in touch about other concerns: like impatient motorists mounting the pavement, and particular problems around the Coach and Horses junction.

Building a Kibworth bypass would obviously require far more money than the county council has. If we are going to make major upgrades to the A6 we would need to first get it recognised as a trunk road so we can get money from central government.

The creation of the Major Routes Network is a chance to put us back on the map, as the first step towards fixing the A6. I can't pretend this is likely to be a quick process, but let's start making the case now.”

Residents have started a petition to address these problems, which you can find here: