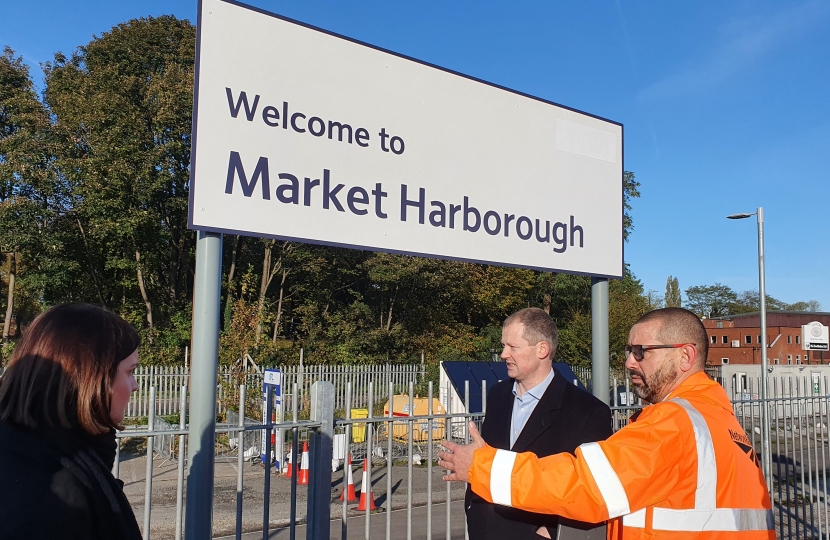 The purpose of the meeting was to consider possible improvement works to the Station and its surrounds, following concerns being raised about the appearance of some parts of the station.

Neil said, “It was a really useful and productive meeting, for which I’d like to thank both Network Rail and East Midlands Rail. It was helpful to have the meeting at the Station itself, so we could quite easily see the different issues and areas of improvement.

Stations like Market Harborough are an important gateway for the areas they are in, and I’m keen to ensure our Station does justice to the wonderful town we have. We discussed a range of areas including the general maintenance of the Station and grounds, as well as the configuration of the carpark at the front and how this could be better utilised for drop-offs and pick-ups.

I’m pleased that both Network Rail and East Midlands Rail acknowledged these points and have agreed to look at what more can be done here. They will be considering the various elements we discussed and coming back with an action plan for improvements that I very much look forward to seeing in the coming weeks.”

Gary Walsh, Route Director for Network Rail, added: “It’s vital that our stations positively reflect the communities they serve and I am grateful to Neil for raising his concerns about Market Harborough with us.   We had a productive site meeting and we are committed to work with our colleagues in EMR and the community to make this station a more fitting gateway for the town.”

Rachel Biggs, Customer Experience Manager at East Midlands Railway, said: “We were happy to meet up to discuss ways to improve Market Harborough Station and address some of the concerns that have recently been raised.

“We look forward to working with Neil and Network Rail in the coming weeks to understand which elements can be adapted or improved.”

Speaking on the new sanctions imposed by Russia in response to comments made on the war in Ukraine, Neil O'Brien MP said, “What we’re seeing in Ukraine is barbaric, inhumane and chilling.