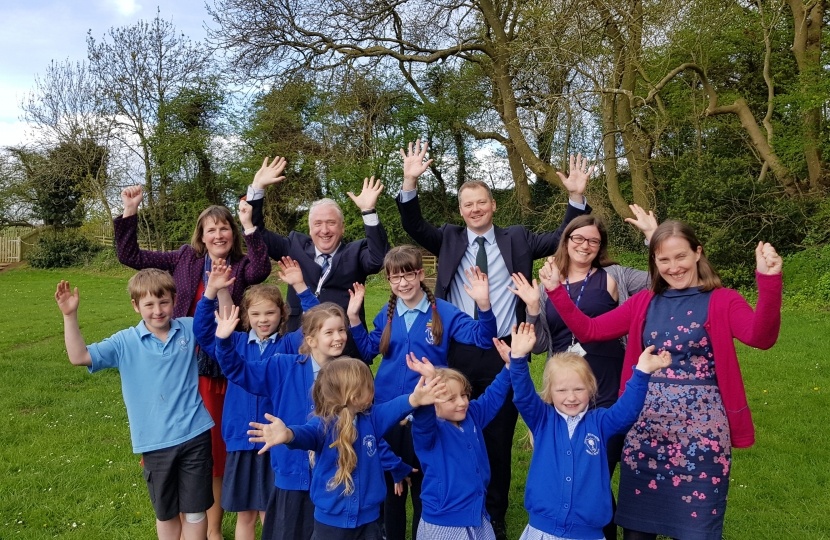 Neil O’Brien, MP for Harborough, joined South Kilworth Primary School recently, to celebrate the news of their funding award for the build of a new school hall. Following a tour of the school, Neil also met with pupils and their parents at the end of the school day.

The funding bid from South Kilworth Primary was recently approved by the Department for Education, and construction is due to start in the coming months, and due for completion later in the year.

Neil said, “I was incredibly pleased to hear the news that their funding bid had been successful. It’s a great school with a brilliant learning environment, and this new hall will only improve that even further.

I’ve seen for myself how hard the staff work in quite limited space. Having to use the village hall hasn’t been ideal, but unfortunately they haven’t had any alternative options, so I was only too happy to provide a letter of support for this when asked. I would like to commend both the previous headteacher Rachel Chamberlain, and current headteacher Lisa Gilchrist, for their excellent work on this to date”.

Lisa Gilchrist, Headteacher, said: “We’re delighted with the news that we’ll be getting a new hall for our school. It really will make such a big difference to all of our pupils and teachers. It was great to show Mr O’Brien around and we look forward to hopefully showing him around again once it has been completed.”

I am a strong advocate of good education and I am fighting for fair funding for our schools.  I went to a state school and then university and want to make sure others have the same chances I had.