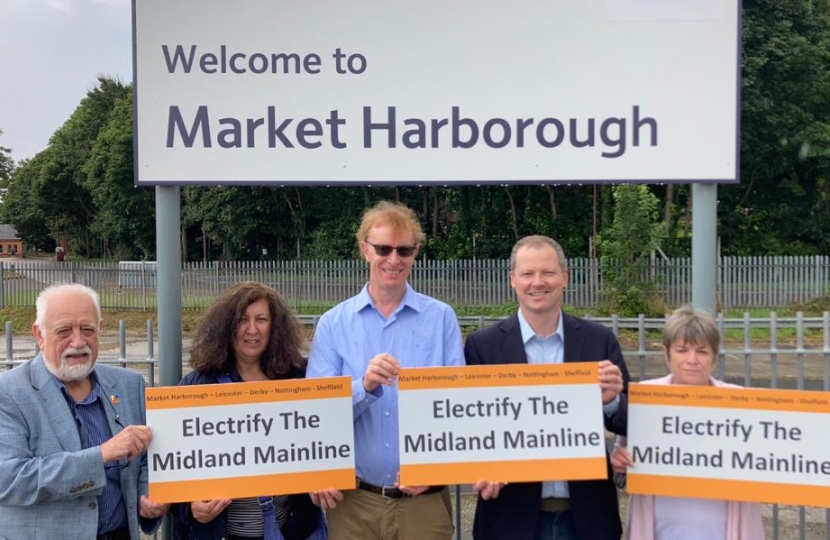 Neil O’Brien, MP for Harborough, has welcomed the news today that the Midland Mainline will be electrified in full. It has also been announced that work will begin by the end of this year to electrify the line between Kettering and Market Harborough.

Neil said, “I’ve been campaigning for full electrification of the line for years alongside the Leader of Harborough District Council, Cllr Phil King.

“Electrification will make trains faster, quieter and cleaner across the whole of the Midland Mainline.  You won’t have to walk through a fog of diesel fumes at St Pancras anymore, and the trains will be quieter as they come through Market Harborough, Great Bowden, Kibworth, Newton Harcourt and Wigston.

“Alongside the improvements to Market Harborough Station that I’ve recently been pressing Network Rail and East Midlands Railway to make, the overall experience of local rail users should improve considerably. I appreciate how important these services are to my constituents who use the station and trains either for work to commute into London or Leicester in particular.  And it is a big and welcome step towards the country going green as well.”

“Making this investment will enable us to get the most out of the high tech new trains that are being built for us at the moment.  And it complements the other major investments that are being made to speed up journeys between the east and west midlands too.”

Speaking on the new sanctions imposed by Russia in response to comments made on the war in Ukraine, Neil O'Brien MP said, “What we’re seeing in Ukraine is barbaric, inhumane and chilling.