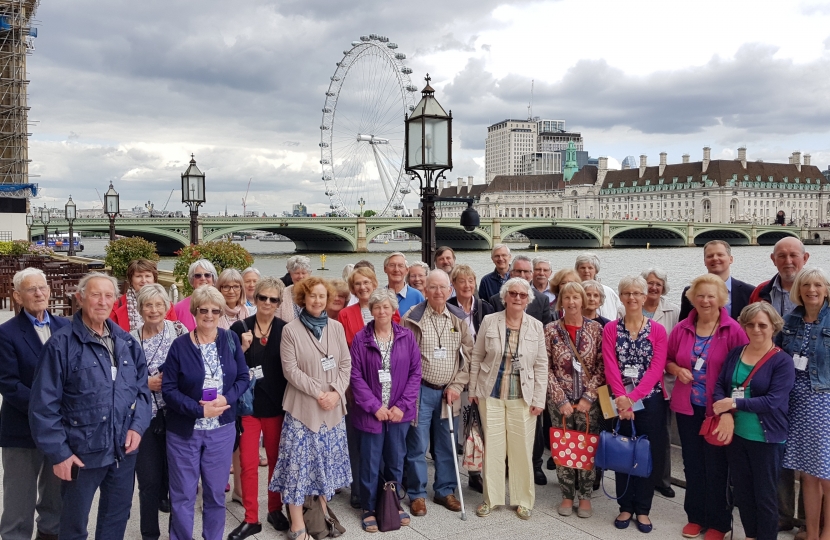 Neil O'Brien, MP for Harborough was joined by members of the Market Harborough U3A in Parliament on Monday 3rd June 2019.

As part of the visit, members were given a guided tour of Parliament which included access to both debate chambers in the Commons and Lords. This was then followed by lunch and a Q&A session with Neil in one of the Parliamentary Committee rooms. After this, the group then visited the terrace overlooking the Thames, before their coach departed.

Neil said, "It was a pleasure to host the MH U3A members in Parliament. I had previously joined some of their members for a lunch in Market Harborough so it was great to be able to repay their hospitality and warm welcome.

Groups like the U3A contribute so much to the area by providing a range of different activities for people to engage in, and I pay tribute to their efforts."

Stella of Market Harborough U3A said, "Thirty nine members had a very interesting guided tour of the Palace of Westminster and learned a lot about parliamentary procedure. After a quick lunch, we met with our local MP, Neil O'Brien, and his team, who took us through the tunnel connecting to Portcullis house for a Q and A  session in the Wilson Room.

The day finished with a photo opportunity on the terrace and a walk in the sunshine along the embankment back to our waiting coach. There were a large number of police around to protect us which we thought was kind of them, perhaps it was something to do with the fact we were in town at the same time as Donald Trump!"