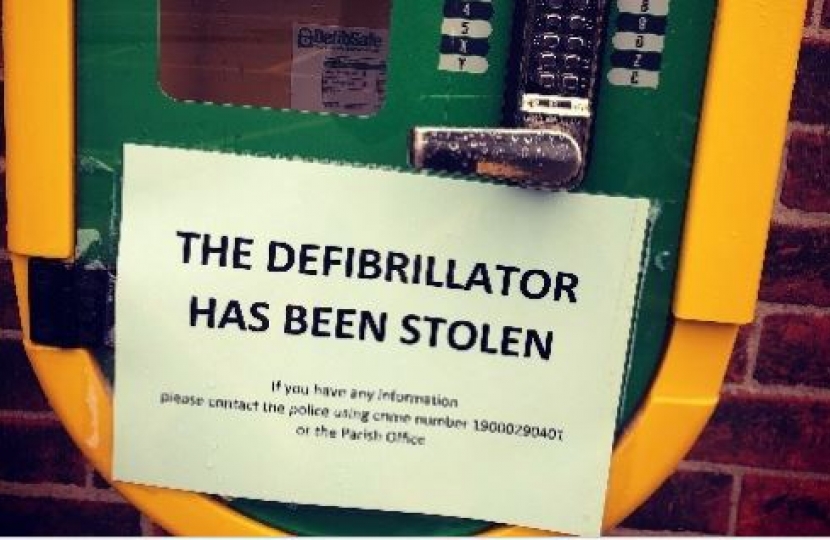 Neil O'Brien, MP for Harborough, Oadby and Wigston has praised the efforts of local campaigners to raise funds to replace a stolen defibrillator in Oadby.

The St Peter's defibrillator was recently stolen, having initially had funds raised by local campaigners form the 7events Foundation.

Jit Chauhan of the 7events Foundation said, "When we found out the defibrillator was taken, it was fairly disappointing as a lot of hard working went into raising money for it, and it would be the local community who would be effected the most. It is there for a reason and that it to save someones life, so to see if removed in the manner it was, we were left dumbfounded.

However, we were adamant to remedy the situation, so the 7events Foundation decided to start a crowdfunding page to raise money to purchase a replacement defibrillator. We the support of staff at the St Peters Church rooms, the local community and those from around Leicestershire, the page was shared and the money was raised within three days. So withing the next week or two we will be purchasing a replacement.

To us, this just demonstrates and no surprise, what can be achieved when the community comes together for the community. We were sure we could raise the money, but didn't expect it in such a short time. We can'y complain about that!

We just wanted to thank everyone involved in making this happen and those who made donations."

Neil said, "I'd like to thank Jit and everyone else involved in replacing this hugely important device. They have saved a number of lives across the country already, so it's sad to see someone stealing something that could potentially prove to be so important. But the funds raised in such a short time show the strength of the local community and I'd like to pay tribute to them and their efforts."